The Grand Harbour in Malta

The Grand Harbour (il-Port il-Kbir) in Malta is essentially a natural harbour which is probably the island's greatest geographic asset, and a cardinal determinant of Malta's history. This is reflected in its commercial activity and its military architecture.

The Grand Harbour is sometimes referred to as Valletta Harbour but this is arguably incorrect. Valletta is built on a promontory between two harbours: the Grand Harbour and Marsamxett (Marsamscetto) harbour with roughly equal coastlines on either, although more of its commercial activity is on the Grand Harbour side where the 'Custom House' is located.  Moreover the Grand Harbour was Birgu's harbour before Valletta was built, and Birgu (Vittoriosa) and Senglea are more completely ensconced in this one harbour than Valletta is.

This page shows some views of the Grand Harbour in Malta.

The image which follows is of the entrance to the Grand Harbour as seen from within - i.e. from the ramparts of Fort St Angelo which has a commanding position at the centre of the harbour, and is the oldest fortress responsible for defending the harbour.

In the distance, guarding the entrance on the left hand side of the photo is Fort St. Elmo whilst on the right is Fort Ricasoli. In between the two one can see two breakwaters with small lighthouses (almost superimposed in the photo) which indicate the entrance.

As the photo shows, Fort St Angelo though set back from the entrance of the harbour still has a commanding position over it. Thus in the Great Siege of 1565 (when Fort Ricasoli had not yet been built) even after Fort St Elmo had fallen to the besieging Turks, the enemy still preferred to drag boats overland to get to the inner part of the harbour than to run the gauntlet past the guns of Fort St Angelo.

Further inland the Grand Harbour presents a very thriving picture. There are a number of cruise liner berths such as the ones in the image below at Pinto wharves in Floriana (a suburb of Valletta).  Whilst in the background (beneath Corradino heights with is grain silos) alongside Magazine wharf to the left and Laboratory wharf to the right are moorings for cargo vessels (e.g. grain carriers) and other commercial vessels.

It is possible to see a 'real time'  view of the Grand Harbour from the a webcam from Valletta. This webcam tends to rotate in an anticlockwise direction and usually the following landmarks can be seen ( starting with the one closest the camera ) :
The upper Barrakka gardens ( double rows of arches )
Kordin ( Corradino ) heights with grain silos, cranes and cargo shipping
French Creek ( with the large number 6 dock on the right side )
The Senglea peninsula ( with the 'gardjola' vedette at its tip )
Dockyard Creek ( no longer a dockyard but the Grand Harbour Marina, often with super yachts in the foreground )
Fort St Angelo - the principal landmark ( with Birgu behind it )
Kalkara Creek ( yachts here too )
Bighi ( many 19th century buildings - old military hospital )
Fort Ricasoli ( guarding the harbour entrance )
Lower Barrakka gardens ( with monuments )

You can also access a 360 degrees panorama from Valletta (or a map of the city).

The image below is a close up of the curtain wall of Valletta showing above it part of the length of the 'Sacra Infermeria' or Holy Infirmary of the Knights Hospitallers of the Order of St John.

On the side opposite to Valletta lie a number of fortifications, walled cities, towns and villages. The main fortification is Fort St Angelo (the 'Castrum Maris' of ancient times) at the tip of the Vittoriosa promontory,as shown in the following view from the Lower Barracca gradens:

To the left of Fort St Angelo is Kalkara creek, whilst to the right is Dockyard creek. This is so called because the dockyard first started operating here, and 'Number one dock' is deep inside this creek. However there has been no dockyard activity in this creek for several years. The dockyard is now in the next creek along - further to the right beyond the Senglea headland - so called French creek - surrounded by docks 2 to 6. The second photograph is taken from different angle - further away from the mouth of the harbour and also shows how Fort St Angelo dominates the centre of the Grand Harbour.

The Upper Barrakka (Barracca) gardens in Valletta offer a vantage point for some of the finest views of the Grand Harbour (similar to the one above), and other good views from the Valletta side can be obtained from the Lower Barrakka gardens.

The next image shows the Upper Barrakka gardens during Valletta's 'Notte Bianca' (white night) on the 4th October 2008. Note the arches more vividly illuminated than usual for this occasion. Below the second row of arches lies the 'saluting battery'. It is now only used as a tourist attraction, to fire the mid-day gun and on special occasions. However it saw active service during the Second World War since a very exposed light anti-aircraft battery (Bofors gun) was based there to protect the harbour. The fortification behind and to the left of the arches is St James' Cavalier. The building flying the Maltese flag to the right of the arches is the Auberge de Castille (The Office of the Prime Minister). The photograph was taken  with a zoom lens from Birgu on the opposite side of the Grand Harbour and Birgu's 'roof scape' is evident in the lower part of the image.

The following photograph shows 'The Maltese Falcon' - shortly after entering Grand Harbour and with Fort St Elmo in the background in August 2009. Note that she is now flying the Maltese maritime flag.

The next image is another view of the tip of Fort St Elmo - note the second world war concrete towers which were part of the coastal defences, placed on top of the much older fortifications. In the foreground of the the first image below is one of the smaller (inshore Swift class) patrol boats  of the Armed Forces of Malta (AFM).  The next image, also of the Grand Harbour with Valletta in the background, shows P61 the largest vessel of the AFM Maritime Squadron (2nd Regiment) which is a modified Diciotti class offshore patrol boat. 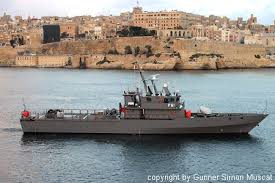 Many naval vessels of various countries can be seen in Malta (usually in the Grand Harbour) by following this link.

On either side of the Birgu (Vittoriosa) promontory tipped by Fort St Angelo are creeks and other headlands. Thus beyond Kalkara creek is Bighi where the ex-British naval hospital was situated (to the East of the Knight's earliest Holy Infirmary in Birgu and to the South of the later Holy Infirmary in Valletta). Bighi hospital is shown in the next photo:

A large variety of vessels visit or have visited the Grand Harbour in Malta. While Malta was a British colony the Royal Navy had a substantial fleet in the Mediterranean and the Grand Harbour was home to many of them, as the following photograph (circa 1910) of Dockyard Creek (to the West of Fort St Angelo) shows.

The following photograph taken at the same time shows the harbour to the east of Fort St Angelo with other Royal Navy warships at anchor. The warship anchored just off Bighi point, outside Kalkara creek, and with white markings on the first and fourth funnel is the armoured cruiser Black Prince which was subsequently sunk by the Germans at the Battle of Jutland in 1916. Other historical photographs of the harbour can be found through this link.

The following image shows a close up of Pinto wharf  with a cruise liner berthed.  Note the visiting naval warships moored alongside each other in the foreground.

The next image shows a large semisubmersible heavy lift ship / self-propelled barge. This is a vessel designed to partly submerge and then lift and transfer large rigs or other ships. The ship seen in January 2008 is the Fjord (Fairstar / Fairmount), though it is similar to the Fjell.

It is seen moored off Bighi (with Valletta in the background) - at the widest stretch of the harbour: It had been converted in dry dock in Malta and was undergoing sea trials.

The Grand Harbour's commercial activity is not limited to shipping since a seaplane service to the sister island of Gozo as well as a base for aerial sightseeing operates from the main channel.

The final image below shows Fort St Elmo (at the tip of the Valletta headland) on the left hand side, then the gap in the breakwater, followed by the author and finally Bighi (ex Royal Navy hospital) on the right hand side of the photo.

On the left hand side one sees a gap in the footbridge (which has since been repaired - in October 2011) as a result of damage inflicted by an Italian naval attack in World War II at dawn on the 26th July 1941. The attack was arguably both brave and foolhardy. The attacking Tenth Assault Flotilla (Decima Flottiglia Mezzi d'Assalto, or Xª MAS) was a torpedo / E-boat unit of the Regia Marina. The enemy force was spotted, and engaged by the defenders' guns from Fort St Elmo and Fort Ricasoli (both seen at the harbour entrance above) as well as highlighted by searchlights and attacked by guns in coastal forts and batteries further afield (Fort Tigne, Fort St Rocco, Fort St Leonardo). The seventeen attacking vessels paid a very heavy price as they were annihilated and none made it back to base. Their objective, a convoy and other vessels in harbour, was unscathed. This damage was finally repaired in October 2011 (images to follow).